A place to talk about more serious topics such as politics, society and current events.
Forum rules
Please read the discussion section rules before posting in here. By posting in this section, you acknowledge to have read and understood them, and agree to abide by them at all times.

Of course, the global forum rules apply here too.

NOTE: posts in this section are not counted towards your total.
Post Reply
12 posts • Page 1 of 1

What's good, and what are you currently reading? 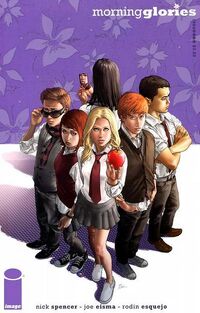 The first issue was free the day I downloaded comixology so I got it just to demo the app. It was kinda good, so I got volume one... and I'm hooked. There are gifted youngsters who are being held against their will as students at Morning Glories Academy, and there is some supernatural/sci-fi thing going on behind the scenes. There are plot holes, contrivances, the supernatural thing hasn't been explained enough yet for me to care, but there is major potential. A couple of the characters are so good they made me put down my phone and ponder at life. There are clever twists and interesting developments, cliffhanger stuff and more. So, it is a very inconsistent story, but the highs more than make up for the lows, and they are the sort of highs that are missing from other stories. Don't judge it without trying it - it's a lot better than you'd expect.

A classic by Warren Ellis. Lots of social commentary, and many lulz.

It chronicles the battles of Spider Jerusalem, infamous renegade gonzo journalist of the future,[2] an homage to gonzo journalism founder Hunter S. Thompson. Spider Jerusalem dedicates himself to fighting the corruption and abuse of power of two successive United States presidents; he and his "filthy assistants" strive to keep their world from turning more dystopian than it already is while dealing with the struggles of fame and power, brought about due to the popularity of Spider via his articles.

I finished the fourth issue a month ago and I'm keen to get back.
Ceterum autem censeo Samsung Mobile esse delendam.

ok, I am going to post links to the respective comixology pages...

Saga. A friend of mine and I were talking about "Y: the last man" and he mentioned that the writer is also doing this series. Really, really good. Artwork / story / ideas are all top tier.

BRIAN K. VAUGHAN returns to comics with red-hot artist FIONA STAPLES for an all-new ONGOING SERIES! Star Wars-style action collides with Game of Thrones-esque drama in this original sci-fi/fantasy epic for mature readers, as new parents Marko and Alana risk everything to raise their child amidst a never-ending galactic war.

Glory. Started reading this after comicbookgirl19 recommended it. Bada$$!

After missing for almost a decade, Glory's whereabouts are uncovered by a lone reporter, but the globe-spanning conspiracy keeping her hidden from humanity could make her return more dangerous than anyone ever anticipated! This first issue of an brand-new saga written by Eisner & Harvey-award winner JOE KEATINGE and illustrated by Wet Moon and Shadoweyes creator ROSS CAMPBELL sets up Glory's future by expanding on her past in a way promising to shock long-time fans and excite all-new readers!

Y the last man. Friend of mine told me about this one. No superheroes, but really good character portrayal and very funny.

Yorick Brown--the only human survivor of a planet-wide plague that instantly kills every mammal with a Y chromosome. Accompanied by his pet monkey, Yorick searches for his lost love...and the answer to why he's the last man on earth.

When an accident gives Mitchell Hundred amazing powers, he becomes America's first living super-hero. Eventually tiring of risking his life merely to help maintain the status quo, he retires from crime-fighting and runs for Mayor of NYC, winning by a landslide. And that's where his adventure begins...

All Star Superman. Started reading after watching a video by comicbookgirl19. After 3 comics, I can tell that I will be reading the whole series.

Aphrodite IX. This one is a guilty pleasure. The plot and background story are actually quite good. But I started reading because of the hot chick on the cover. There is also a Vol.2 which takes place in the far distant future.

Aphrodite IX is the perfect weapon, she's programmed to kill and then erases all memory of the mission and her former life, like a reset button was hit in her mind.

"Every normal man must be tempted at times to spit on his hands, hoist that black flag, and begin slitting throats."
- H. L. Mancken
Top

As a matter of interest, do you guys buy physical comics, or do you use a tablet / smart phone app?

I use the Comixology app. It is much more convenient.

I would go into a store only to buy a graphic novel / collected work. For example I have the Spiderman Torment mini-series as a single book.
"Every normal man must be tempted at times to spit on his hands, hoist that black flag, and begin slitting throats."
- H. L. Mancken
Top

I used to buy physical, but I think I prefer the Comixology app now. Both for convenience and because of having suffered the trauma of accidentally ripping the pages of a rare Spider-Man comic on loan from a friend.
Ceterum autem censeo Samsung Mobile esse delendam.

. I have the Comixology app on the iPad but refuse to start buying comics because I will waste a bucket load of money I don't have buying comics.
JUSTICE, n A commodity which is a more or less adulterated condition the State sells to the citizen as a reward for his allegiance, taxes and personal service.
Top

Yeah, Comixology can be as evil as Steam

100% concur. I had to literally force myself to put my phone down while I was reading Y. Still, worth it.
"Every normal man must be tempted at times to spit on his hands, hoist that black flag, and begin slitting throats."
- H. L. Mancken
Top

Bought a new South African graphic novel at Icon. Will tell you if it is any good

So Comixology gifted all it's members with a $5 voucher. Nice, huh? But comics are still expensive.

Humble Bundle and Image Comics to the rescue!

Sounds fun let me know if you find out

"I hear voices in my head but they are my own this time"
"Except for a battle lost, there is nothing so terrible as a battle won."
"Sanity is for the weak!!"
Top

I used to have a small mountain of Buster comics back in the 1980s. Also a number of superhero and Tom and Jerry comics from when they cost 20c each. [A lot of money if one doesn't have an income and can only resort to asking a parent or older relative to buy it.]

I enjoy my superhero comics, and would probably buy collections of older comics to read if the price was right.